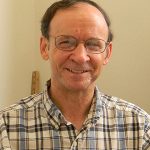 Pastor Doug Carlson became Grace Church’s pastor in April, 2002, after pastoring a church in the Grand Rapids, Michigan area for thirteen years.
He graduated from Grand Rapids School of the Bible in 1979, and has degrees from Cornerstone University (Grand Rapids)
and Moody Graduate School (Chicago). Married (to Judy), the couple has five grown children (and six grandchildren) who all live in the area.
Doug has been a part of FRCZ since the beginning in 2007.